We get asked about our best beer fairly frequently and it’s a common Google search. A question with no answer or a thousand answers !

If best means “lots of” then Bud Light is in the running with 28 million barrels sold a year in the US.  Knocking even this behemoth into second place, the Chinese megabrand Snow Beer outsells Budweiser twice.

On the sales measure Beer Park stocks none of the best beers in the world. That’s because to get those sales the megabrewers are following a common and highly successful creed that the colder, more carbonated and easier drinking (lacking flavour) a beer is the more it sells.  Even better if that beer is made cheaper by using rice instead of malt or by knocking the ABV down a little.

If best means “liked it”, what we do use in Beer Park is the crowd-sourced ratings of Untappd.  An app 10 years ago in North Carolina provides a spookingly complete catalogue of the world’s beers and each year gathers 130 million ratings from 9 million user accounts worldwide. In trusting these ratings we are assuming that if you can be bothered to a) have the app and b) check in you are thinking about the beer and have valid experience.

So, do the users of Untappd have the answer to the question ?  Well, up to a point !  The collective style preferences of the craft beer community are skewed towards barrel-aged stouts and Double IPAs as these beers are most remarkable and astounding when first tasted.  As such, these styles dominate the rankings.  Session ales, traditional beers and lagers score poorly in comparison. The use of Untappd by brewers and drinkers alike has been called “the tyranny of the tickers” and is probably driving some unhelpful practices

Using the Untappd rankings we do have a couple of the world’s best beers.  Baladin’s Xyauyu Kentucky is a 14% barrel aged barley wine and ranks as Italy’s best beer and DDH Spur, a remarkable Triple IPA from Polly’s Brew Co ranks as the best Welsh beer.  They are indeed cracking beers and we are glad to stock them.  They are both lovely beers but not my preferred drinking on a normal day.

If best means “technically best” then you’re looking at the results of beer competitions judged by trained or experienced judges. This could rank beers against style criteria – “which stout is the best stout” or technical competence. Of course, to get the best beer you would need to rank beers across style criteria and ask the knotty question  “is the best stout a better example of a stout than the best pale ale is as an example of a pale ale”.  We stock a number of beers that proudly display awards although there is a multitude of such competitions.

So I’ll leave the definition of best beer as one of personal judgement and in my case a very fickle judgement.  I have probably 20 best beers depending on the way the wind is blowing.  This is why Beer Park stocks almost 600 different beers.  Find your best but don’t stick to it because the next one may be better – at least for today.

Check out my other Beer Park Blogs 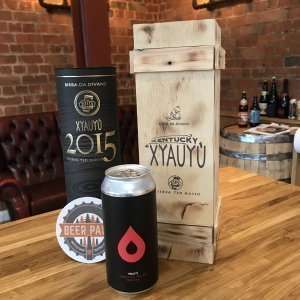