The first CAMRA Good Beer Guide in 1974 has a two page appendix proudly listing “all the breweries in England, Wales and Scotland’.  The list contains 103 brewers of which 4 are in Wales.  Of these – 2 remain – Felinfoel and Brains.  This is rightly regarded as the low point of British beer.

Today we’ve identified around 95 active businesses brewing and selling beer in Wales. To put the change into perspective, there are now twice as many active brewers in Swansea than were brewing in the whole of Wales in the 1970s.

Firstly, the only survivors of the great Victorian brewing heritage of industrial Wales – Felinfoel from 1878 and SA Brain from 1882.

Secondly, the product of the CAMRA revolution in traditional brewing from the mid 1980s on such as Bullmastiff, the reestablishment of Rhymney and the growing Evan-Evans and Glamorgan alongside 30-40 micro or pub focused operations which still survive.

Finally, the craft wave, perhaps starting with Tiny Rebel in 2012 followed by Crafty Devil, Tenby, Dog’s Window and the inimitable Polly’s among many others in the years since.

The second and third waves overlap, with new breweries in traditional and modern styles arriving each year – at least 15 new additions in the last 2-3 years alone.

The variation in Welsh beer and in Welsh breweries is staggering – one man operations producing world-class hoppy wonders, to new businesses rapidly gaining foothold in supermarkets, to wild fermented, barrel aged beers from the north of Powys, to US West Coast style smoked porters and stouts from Newport.

In opening Beer Park I wanted to offer as many Welsh beers and breweries as we could source, for drinking in, take out and delivery.  We’ve opened with around 50-55 so not a bad effort so far and, I may be wrong but possibly the largest range of Welsh beer for consumption at a single venue in Wales.

We’ve also added a Welsh Beer Challenge subscription https://www.beerpark.co.uk/product/12-premium/– 8 beers a month with the promise that over a year we’ll try to send you a beer from all the Welsh breweries that bottle or can.

I do also want to acknowledge Neil Goodman from Wales Ales who over the last few years has made it a one man mission to personally deliver the product of small Welsh breweries to his local customers.

Happy to be contradicted on any of this amateur analysis by the way and I’m sure I’ve missed some breweries from the 95 so please reach out. 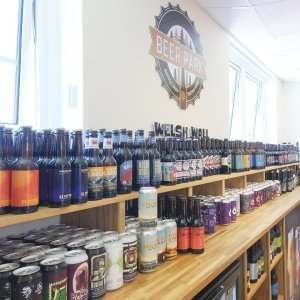 Beer Prejudices and How to Beat Them
Scroll to top