You are here: Home1 / News2 / Uncategorized3 / Craft Beer in Madrid

I will confirm that Madrid’s Mahou and Barcelona’s Estrella Damn lager ranges still predominate. I did have a rather nice pint of Mahou 1906. However, I found we could rapidly move on to DIPAs, lambics and barrel aged stouts in three splendid venues.

The first bar I knew about from our stocking of Madrileno by Oso Brewing. An excellent DIPA that rapidly sold out.  Oso is a gypsy brewer with a small taproom on Cava Baja in the La Latina district called La Osita.  This rather dictated our choice of hotel only two doors down this street which otherwise comprises almost wholly of tapas bars.

So, we arrived in La Osita about 6 minutes after checking in to Posada Del Dragon to find eight or so taps, a large range of cans and bottles, a chatty barman and some raciones.  A good mix of Oso beer including IPAs and a rather splendid 13% stout plus guest bottles from amongst others Cantillon and De Struise. We stayed for a couple of hours until closure.

On the following day we were outside as they opened at 7pm for pre-dinner drinks. One of the brewery owners, David was serving.  It took about 5 minutes for us to find out that David spent his summer holidays at his grandfather’s house approximately 200 yds from where we live in Llanelli.  After an enjoyable hour we adjourned for half a roast lamb and a bottle of rioja at Posada de la Villa opposite. Mrs TH went back to the room and I rejoined David to share a bottle of Cantillon Fou’Foune – an apricot lambic blend. Not a bad start to our trip.

A recommendation from La Osita was a venue with the unpromising name Be Hoppy. This is a bottle shop and bar on Calle Fucar towards the Prado and Atocha station.  The shop observes siesta timing so opens in the morning and reopens at 6.  Eight taps offering a varied range from an Alvinne sour, Deya to the US brewery Hair of the Dog.  The shelves blow you away with the best range of lambics and gueuzes I’ve seen in one place plus a good range of IPAs (all chilled) from across Europe, German lagers and cracking stouts. Owned by Darren from Manchester who was kind enough to crack a 3 Fonteinen Cuvee Armand & Gaston so we could toast Armand on his 70th birthday.

The final venue was a last minute discovery.  Sitting in a Cava Baja tapas bar drinking a Mahou and looking at an unpromising menu, I happened to check Untappd to find Starbeers (another dodgy name) was a verified venue a 3 minute walk away.

Walking in, Starbeers looks a bit like a sports bar – football and darts.  Another eight or so taps on – mostly with Spanish beer from small breweries DouGalls, La Quince and Soma. Sat at the bar and glanced a bottle of Founder’s KBS which warmed up whilst I finished a La Quince Biodroid IPA.  Apparently, Mahou are the majority owner of Founder’s so the beer is easier to find in Madrid than here in the UK. I was expected an average tapas offering but when a plate of fried pig’s ears arrived we realised we were in for an interesting menu and a great selection arrived over the next hour or so.  Finished the evening off with a Vermouth and Japanese whisky from Alberto, the owner’s own stash.

I never thought of Madrid as a beery destination but with the growth of craft beer in Spain from Barcelona’s Garage brewing, Zaragoza’s Cierzo and Basqueland from the North amongst many others it certainly deserves consideration. 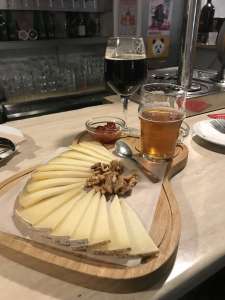 Free delivery to South East Carmarthenshire, Swansea and surroundings until 22/12. We courier nationwide for £6.95.